Production and spreading of a new type of disposable dishes (concept)

Advantages of the project: Possibility to start with minimal investments.
The project can be realized without purchasing of equipment for items production.

The way of life of modern people changes with each conning day more and more fast and radically. Today anything that people use manufacturers strive to make still more comfortable, useful and rich with information. Various goods are produced to save time of the customer which he can use for more pleasant and developing activities or to become the source of those mentioned above. The future undoubtedly belongs to the goods which will be able to combine the maximum of such features.

This project is called to perfect that which for centuries has remained unchangeable and that which has appeared quite recently: the classical and disposable dishes.

These improvements the rights for which are protected by patents make dishes more variable, capable to change its color and design depending on the whish of its owner and considerably simplifies its washing, makes it more save for health and environment.

It can easily contain pre-packed instant drinks (tea, coffee, refreshing drinks) or food. It will remain only to pour water and use them. The new dishes will not only be more comfortable in use then the classical and disposable ones, it can also contain useful information. Such information can be just a pleasant design or a picture, or some interesting facts, news, humor and advertising.

The dishes proposed here has absolute advantage in comparison with ordinary and disposable ones.

This brochure is a concept of a new merchandise and its market entry. Profitability of the disposable dishes production factories has been proved since long ago and business plan of such production is typical. The only serious difficulty is to enter the market which is saturated with similar production which has almost equal characteristics regardless of manufacturer. The advantage of the project is in introduction of a new special merchandise onto the new market where it will have no other direct competitors only the allies: love of comfort, love of beautiful things, habits to use tea-bags, instant coffee or fast food.
Basic advantages of new dishes and also a would-be strategy of the project realization will be considered in more details further on.

Description of production and its types

Constructions of the new dishes consist of two parts: hard and elastic. The hard part is made of the ordinary glass, ceramic, metal or plastic. It is a plate or a glass or a cup of a special form which itself can be used as a normal dish. It provides for the dish the appropriate solidity and reliability. The elastic element is the plastic insertion covering all inner and part of outer surface of the dish. The insertion has the especially curved edges for better fixation quality. 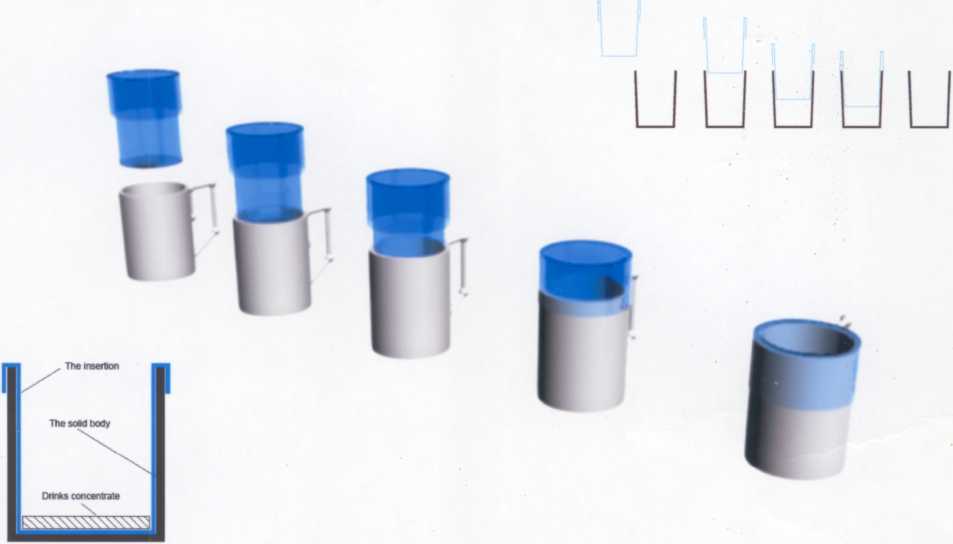 When used the insertion is first put into the dish then the food is poured/put into it. Disposable insertions may contain pre-packed product covered with protective membrane of plastic, foil or paper. The protective membrane is taken of and then water or other liquid is poured into the dish and you’ll have a required drink or food. From the inner side a napkin or piece of disposable cutlery can be fixed to the membrane.

After use the insertion is extracted and utilized (thrown out) and the dish remains clean. A drawing and a text can be placed on the insertion on the outer and the inner side as well as on the protective membrane. It improves the appearance of the dish and makes it every time different. The customer can arrange his plate and cup in accord with his mood and taste. Humor, scientific facts, interesting quotations, advertisement can be placed on the insertion.

Advertising on the dishes especially on plates is highly effective. A person will consider it for a very prolonged time, anyway, during his or her meal the dish will still be in sight.

Because of a very high effectiveness of such advertising it’s recommended to ban advertising on the dishes of alcoholic drinks, cigarettes, placing information of pornographic or occult content. It is necessary for the investor to be strong enough, influential and appreciate morale values of Christianity.

Food and concentrates pre-packing into disposable dishes is widely spread all over the world. Inside on the bottom a concentrate of coffee, tea, etc. with sugar or milk is placed. It’s enough just to pour water and you have a tasty drink.

A new type of dishes is oriented for the people who do not want to spend time for wash up however they cannot or do not want to purchase a dishwashing machine. Many people also realize the harm of the washing liquids or powders, which remain on the dishes after washing up. Anyway fare from all people like to wash dishes.

New dishes have an esthetic look and don’t need washing. It’s enough to rinse it with water if there is a wish to. The presence in the insertion of packed dry concentrate of drinks or food also makes it extra the procedure of putting into the dish of tea or coffee and delivers from troubles with tea bags. The new dishes can take up some part of the tea bags and instant coffee market.

Producers accept the used plastic almost by the price of the raw material. It still more increases the profitability of this project and decreases pollution.

It’s possible to produce dishes for domestic use from ecologically compatible type of plastic, which decomposes in a very fast rate, or from laminated paper. It will lessen negative influence on the environment in the brunch of industry as a whole and will get wide support of population.

Here is a list of basic drawbacks of the classical dishes which the new one is avoid:

■     Washing up requires water. The new dishes saves on water, saves the water resource that is very important in the regions where water is rare.

-      washing liquids remaining small quantities on the dish and get into the organism causing harm;

-      washing liquids negatively affect the skin and nails of hands;

-      getting into the sewage washing liquids pollute the nature.

■     To wash dishes a dishwashing machine is often acquired which is costly, occupies place, and requires repairs and delivery. It also needs washing liquids, water and electric power.

Strategy of the project realization

The project can be realized in a few variants which differ not only by scale but also by different ways of production and distribution of the merchandize.

Organization of dishes production by one’s own efforts, creation of the distribution network taking up the market from region to region. Additional investments in production building will accelerate the business growth.

The ordering of the dishes production by license on the already existing enterprises.

This variant looks more attractive. The efforts of development are originally directed on building of the maximally wide distribution network of cafes and domestic customers.

The greater number of users will mean greater demand and bigger price of the advertising that is placed on the dishes. By using such a strategy capital investment requirements will be minimized and the success of the project will depend on the marketing team activity.

The right to produce and sell the dishes of a new type will have only the patent or license owner. Correspondently placing of the advertising on the dishes will be monopolized as well.

Profits from placing the advertising on the dishes will be a few times over the profits of its production. To compare the price of advertising in the popular Ukrainian magazine as to one reader comes up to 5 cents and profit of production of one item of dishes (plastic can) comes up to 0,07 cents. When the number of users grows up profits from advertising will be enough to organize one’s own production.

The growth of the number of users of the dishes when it reaches a certain level will get the chain reaction character as the customers themselves will urge upon their acquaintances to buy. The increasing of advertising campaign will also stimulate such growth.

Organization of production and its profitability.

Production of new dishes is similar to production of disposable dishes and is carried out on the same equipment. The solid part of the dishes is made of glass, ceramics, plastic or metal on specialized factories. Profitability of such production not taking into account profits from advertising and packed concentrates is similar to that of production in a similar brunch.

For example the cost of the enterprise with annual production of 208 millions items (578 000 items daily) comes up to 250 000 USD. The pay-back period is 1-2 years. However the profit from placing of advertisement is capable to overcome even the cost of the dish itself.

Main directions, which the production of the dishes can be distributed to:

For home: information interesting for majority of people is placed according to groups of customers. It can be a drawing, quotations, useful information, humor and advertising.

For office: information, which is interesting and useful for businessmen and employees, should be placed. It can be news of the industry, currency course, other information of professional character. Drawings, quotations, humor and advertising will remain popular.

The company logo and information also can be printed on the insertion. It improves psychological climate in the office and shows to the company clients that it is prosperous and stable.

For cafe: information interesting for majority of people or for the group on which this cafe is oriented is placed. Also menu items or other sale stimulative data can be printed on cups and dishes.

For picnic: such dishes for the purpose of its less weight and cost can be made with plastic body.

For children: Children kitchenware is a specific part of the market. It is possible to place on the dishes information to learn for example learning of alphabet or arithmetic. The dishes with comics or just merry pictures will be popular.

Insertions into different dishes can be applied for other sectors of life and production.

For example new dishes for animals will be very popular as washing up for them is often particularly unpleasant for their masters. It’s much simpler just to throw away the insertion.

Profitability of the project

The ultra-high profitability of the project can prove the following figures:

■     The English (it’s almost 59 million people) daily drunk up 185 millions cups of tea. That is 3 cups of tea per head including babies.

■     2,25 billions of cups of coffee are daily drunk up in the world. Every fifth cup of coffee is consumed in USA.

■     More then half of Americans drink a cup or more coffee a day.

■     150 billions liters of bear part of which is sold in bars, pubs in glasses are produced annually in the world

Depending of success of the advertising campaign the project can be realized with different effectiveness.

Economic calculations based on market analyses, statistical data, researches of the profitability of dishes production and other data are given further.